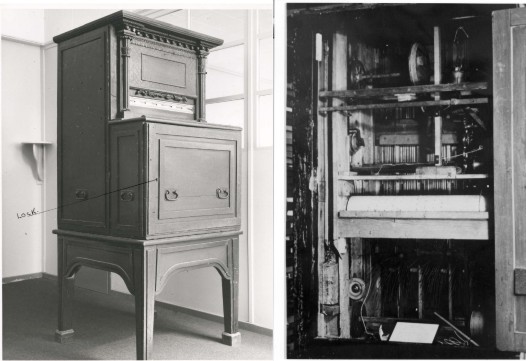 Photo from “The Eureka Machine for Composing Hexameter Latin Verses”

“One of the earliest known poetry generators was born from the Victorian enthusiasm for automata. In 1845, inventor John Clark debuted his Eureka machine at the Egyptian Hall in Piccadilly, London. For the price of 1 shilling, visitors to the exhibition space could wind up the wooden, bureau-like contraption and watch the mechanized spectacle of wooden staves, metal wires, and revolving drums grinding out a line of Latin verse that would appear in the machine’s front window. More specifically, a grammatically- and rhythmically-correct line of dactylic hexameter, the kind used by Virgil and Ovid. The meter-making machine relied on producing just six words that never varied in scansion or syntax (always adjective-noun-adverb-verb-noun-adjective, as in ‘martia castra foris prænarrant proelia multa’ or ‘martial encampments foreshow many battles abroad’). Despite its constraints, the system was capable of churning out an estimated 26 million permutations.”

Behold the Amazing Poetry-Generating Machine! – For nearly 200 years, humans have been creating automatons that mimic our verse. But will they ever really pass as poets? -Leah Henrickson – Slate – 8/29/17